Jupyter notebooks can be used to analyze data stored in openBIS.

It is possible to connect to a JupyterHub server and launch Jupyter notebooks directly from the openBIS interface. This feature is not available by default, but needs to be enabled and configured by a system admin. JupyterHub docker containers are available from our download page: openBIS download. Further documentation can be found here: JupyterHub for openBIS

How to use Jupyter notebooks from openBIS

Jupyter notebooks can be opened at every level of the openBIS hierarchy (Space, Project, Experiment/Collection, Object, Dataset) from the More… dropdown menu, as shown below. 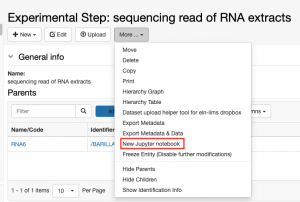 If you get a similar error as the one shown below when you try to launch a notebook from an entity, you need to start the JupyterHub server by going to the main menu Utilities -> Jupyter Workspace. This error appears when the JupyterHub server is restarted (e.g. after an upgrade), because the user profile needs to be recreated.

If you go to the Jupyter workspace, the user profile is re-created on the server. After this, you can open a notebook from any entity of the openBIS hierarchy as explained above (Space, Project, Experiment/Collection, Object, Dataset).

Jupyter notebooks can also be launched from the main menu, under Utilities, as shown below.

Note: if you use SSO for authentication (eg. Switch aai), the first time you want to work with a Jupyter notebook, you first need to open the Jupyter Workspace and then launch a notebook from wherever you want to open it.

When you launch a notebook from the New Jupyter Notebook in the main menu under Utilities, it is necessary to enter:

When you open a Jupyter notebook from openBIS, the default kernel used is Python 3, but you can change to another language as shown below. 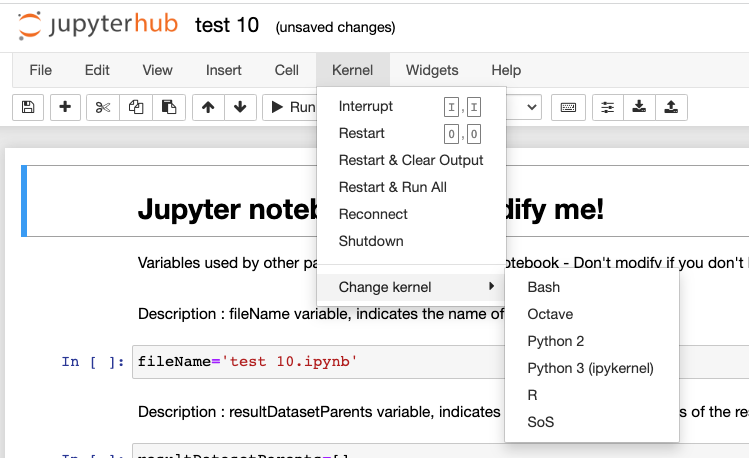 The Jupyter notebook opened from the openBIS interface contains some pre-filled cells. All cells need to be run. The information of two cells should be modified: Name of the dataset where the notebook will be stored and Notes (in red below).

If you are running a JupyterHub version released after July 2021 (available at https://hub.docker.com/u/openbis) you do not need to enter username and password, as authentication uses the openBIS session token.

What to do in case of invalid session token

If your session token is not automatically renewed you will see a long error message when you try to retrieve information of a dataset. At the bottom of the  error message you can see:

In such case, the session token can be manually entered in the cell as shown below:

The session token can be copied from the User Profile under the Utilities Main Menu in the ELN.

Enter the session token, run the cell above and then move to the next cell to get the dataset(s) information.

Alternatively you can go to the Jupyter Workspace under Utilities and restart the server.

Your script should be written in the section named Process your data here, that contains one empty cell (see below). You can, of course, add additional cells.

After the analysis is done, the notebook can be saved back to openBIS, by running the last few cells which contain the information about where the notebook will be stored (as shown below).

It is also possible to use a local Jupyter installation with openBIS. In this case, it is possible to download an extension for JupyterLab that adds 3 buttons to a default notebook: